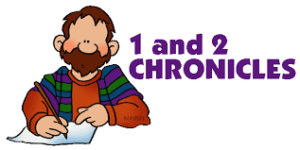 Commentary: While Saul and David occupied a significant portion of the books of Samuel, in 1 Chronicles their story is much shorter. There also appears to be a contradiction as to how Saul died. In the books of Samuel, we were told through an Amalekite that Saul had been killed. Here we see that he committed suicide. Likely the Amalekite hoped to gain David’s favor by claiming to have killed his rival. Even though tribes rejected David as their king, in the Lord’s eyes, David was king over all 12 tribes, as the Lord had appointed him.

David, with the Lord’s help, recaptured Jerusalem with his might men – those who stood with David when he was an outcast. David wanted to do the right thing regarding the Ark of the Covenant, however, he listened to the advice of men instead of relying on the Lord. There was a reason the Lord instructed the Ark to be carried by men instead of by a cart. When David did listen to the Lord, he easily achieved victory, over the Philistines, for example.

Focus Verses: 1 Chronicles 13:7-10 – Why is it so important to follow the Lord? What can happen when you don’t? Do your intentions matter or do your actions?