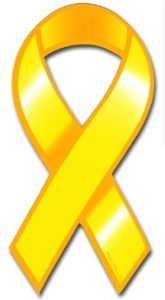 The husband and wife thought they were prepared. With elderly parents, they even expected a cancer diagnoses sooner or later. They had discussed what to do in the event of the eventual death. They thought they were prepared, that they couldn’t be surprised. In the end, it wasn’t the diagnoses that was surprising, it was who had received the diagnosis.

They never thought it would be her. Kira had not seemed that sick when she went to visit the doctor. She had fallen and received lump and some bruising. But a week later the lump was still there. They went to the doctor, who seemed unconcerned but ran some tests, just to be safe. The results were nothing they expected. Kira was only two-years-old. How could she have cancer?

September has been designated as National Childhood Cancer Awareness Month. Take some time this month to pray for children with cancer. Pray for strength for their parents and family. Pray for wisdom for scientists working to cure cancer.