The Pilgrims, English Puritans, fled England in 1608, to Holland because they were being persecuted by the Church of England. The Church of England called them separatists. Some writers say only 35 of the settlers on the Mayflower were, in fact, Puritans.

The Pilgrims/Puritans of the early 1600s would be viewed today, as groups like the Mennonites or Amish. These groups believe in separation from the secular world by forming a society that strives to govern its community through Biblical tradition. The reasons given for the Pilgrims leaving Holland are: 1. Concern for raising their children in a Godly environment* 2. Lack of economic opportunity for them.

So while it is historically correct that Holland wasn’t persecuting the Pilgrims’ for their religious beliefs, it is equally true that the practice of those beliefs played a critical factor in the Pilgrims decision to board the Mayflower and start a new life in the New World.

November 11, 1620: The Mayflower docks in the “New World.”  The Pilgrims who ferried across the Atlantic Ocean, to what today is known as the Commonwealth of Massachusetts, USA, established the Plymouth Colony for the Crown. Only 57 settlers survived the journey across the Atlantic to the New World. 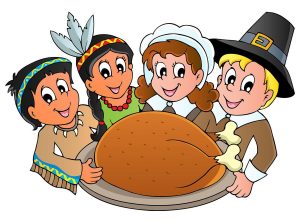 Were the Pilgrims surprised to find the land they claimed for the Crown to be occupied by approximately 5,000 Wampanoag Indians? They shouldn’t have been. English fishermen had already been to New England fishing and some of the Wampanoag had learned English from the fisherman.

Thankful for God’s blessings, which had to include the Wampanoag Indians, the Pilgrims sat down with their new friends to a meal of waterfowl, venison, ham, lobster, clams, berries, fruit, pumpkin, and squash.

When we, here in the United States of America, think of Thanksgiving we think of a feast of the bounty which the earth has produced or sustained through God’s divine order of nature. But when a close examination of what the Pilgrims had to be thankful for indicates much more than food:

1. They survived the persecution of the Church of England in 1608
2. Holland allowed them to practice their faith
3. Opportunity to strengthen their faith available in New World
4. Surviving the journey across the Atlantic to a New World
5. The Wampanoag Indians, who helped them through New England winter
6. Surviving their first winter in New England, for many didn’t
7. The blessing of a bountiful harvest

As you can see from this brief, historical account of the journey of the Pilgrims to the New World to establish the Plymouth Colony, the Pilgrims were blessed in many more ways than just a feast!

On that day in November 1621, it is not hard to imagine that many of the Pilgrims who survived the 1620 journey across the Atlantic ocean to Plymouth colony, reflected upon what they had been through to arrive at, unknown to them, The First Thanksgiving.

This Thanksgiving holiday we at The Forgiveness Foundation Christian Ministries, Inc., encourage you to reflect on these words from the Bible, “… in everything give thanks, because this is the will of God in Christ Jesus for you,” (1 Thessalonians 5:18 NKJV).  Then take a long moment to truly count your blessings. Write them on a piece of paper if you like, then turn to God, the Creator of all, through His only Son, our Savior, Jesus Christ, and thank Him for all the blessings that He granted you. Count your blessings one by one as you give thanks to God!

We at The Forgiveness Foundation Christian Ministries, Inc., wish you and yours a blessed and joy-filled Thanksgiving season!

* The Puritan Pilgrims believed the Dutch culture was a bad influence on their children.