Esther 6-10
Click here for the reading
Day 360: Journey Through the Bible in a Year
Focus Verses for Today: Esther 6:1-11 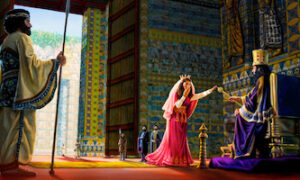 Commentary: The king could not sleep – a problem many have encountered – yet it is a turning point, showing the Lord at work. The king had a scribe read the records to him. The scribe read of Mordecai saving the king’s life, for which he had never been rewarded. Haman’s plan was beginning to unravel. Instead of hanging Mordecai, Haman had to sing his praises, making him rush for the dinner prepared by the queen. During the dinner, Esther presents her petition to the king – she is a Jew and her people are in danger. Esther was placed in the position of queen for just this moment. God had been working on the king. Haman behaved with selfishness. Combined, the Jewish people were saved! The Feast of Purim is a celebration remembering this time in history.

Focus Verses: Esther 6:1-11 – Mordecai had saved the king’s life but received no immediate reward. The reward he was finally given was likely greater than an immediate reward he would have been given. Haman thought so highly of himself that he never considered the king would wish to honor another man. Due to his greed, he was humiliated. What two lessons are learned from these two men in this passage? Does either lesson need to be applied to an area of your life? How? 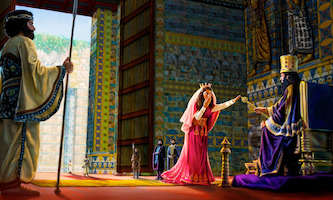