GENESIS 12-15
DAY 23 JOURNEY THROUGH THE BIBLE IN A YEAR
Click here for the reading
Focus Verse For Today: Genesis 15:6

Genesis 12-15: The Lord tells Abram, at the age of 75, to leave his home in Harran leaving all behind that he knew. Abram did not question the Lord. He put together the things he was taking with him and set out for a strange land. He didn’t question God’s direction. Abram got his things together and left. He believed in God’s promise. Due to a famine, Abram is forced to detour to Egypt where they have food. Nothing indicates that Abram doubted God’s promise while in Egypt. Abram and Lot’s, (Abram’s nephew who was traveling with him) herdsmen could not get along and the two groups separated, with Abram giving Lot the choice of land. Abram accepted what Lot had not selected. Lot picked what appeared to be the best land near the City of Sodom. In the Bible, things are not always as they seem. It is important to understand what cannot be seen with mere human eyes. Abram and Lot settled their respective lands and lived as neighbors in peace. Lot, his family, servants, and all of his possessions are taken captive by the three kings that waged war against Sodom. Abram rescues Lot, his family, his servants, and all of Lot’s possessions. Lot returns to Sodom. God makes a covenant with Abram to give to Abram’s descendant’s the land described in verses 18 and 19 and 20. In the eyes of man, this was a problem because Abram’s wife Sarai was past childbearing years. Regardless of what appeared impossible: Abram believed God. (Genesis 12:1-15:21)

Our focus verse for today is about believing God.

“Abram’s belief was counted as righteousness to him.” (Genesis 15:6, NIV)

Belief and obedience go together. Obedience to what a person believes confirms their belief. In chapter 12, Abram was directed by God to a new land. In chapter 13, Abram allowed Lot to select the land he wanted to settle, believing God would provide for his needs. Abram refused the gifts offered by the King of Sodom because it would violate his promises to God and legitimize a kingdom that reveled in sin in chapter 14. In chapter 15, Abram believed God would deliver to him and his descendant’s all that God had promised. Abram’s life reflected what he believed. Abram was obedient to his belief. Are you obedient in your belief? How do you show it? 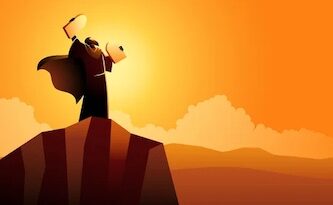