A shoot will come up from the stump of Jesse;
from his roots a Branch will bear fruit.
2 The Spirit of the Lord will rest on him—
the Spirit of wisdom and of understanding,
the Spirit of counsel and of might,
the Spirit of the knowledge and fear of the Lord—
3 and he will delight in the fear of the Lord.
He will not judge by what he sees with his eyes,
or decide by what he hears with his ears;
4 but with righteousness he will judge the needy,
with justice he will give decisions for the poor of the earth. He will strike the earth with the rod of his mouth;
with the breath of his lips he will slay the wicked.
5 Righteousness will be his belt
and faithfulness the sash around his waist.
(Isaiah 11:1-5, NIV)

Recently, many people have talked about starting home gardens. Planting their own crops to lessen their dependence upon stores to buy their food. Many people also come to realize that planting a garden isn’t as easy, or fast, as they may wish. Most vegetables take months to grow. Fruits can take two years until you can reap a harvest! And trees, well some trees can take decades before they produce fruit! 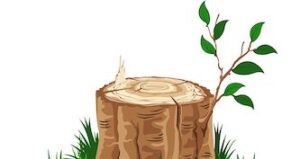 The nation of Israel is God’s chosen nation. He raised them out of slavery in Egypt and delivered them to the Promised Land. But between leaving Egypt and entering the Promised Land, the people of Israel spent decades wandering in the desert. Why? Because they rejected God by failing to trust in Him. Later, once Israel had been established in the Promised Land, the Israelites again rejected God as the nation’s leader, insisting that they be like all other nations and given an earthly king. God, after warning them of what a king could do, granted them their request. The greatest king to rule over the united tribes of Israel was King David. David is described as a man “after the Lord’s own heart.” He was by no means perfect, but he remains the greatest king of Israel.

As more kings came after David, Israel began falling away from the Lord. They forgot Him, stripping His temple of the glories it once held and setting up worship to false gods within the Lord’s temple. Eventually, Israel was destroyed, conquered by a foreign and pagan nation.

But God knew this was going to happen. He had sent prophets, like Isaiah, to warn of the coming destruction and to offer hope for the future. In the first verse of Isaiah 11, God is giving hope to His people. No matter what happens, the line of Jesse, who fathered King David, will remain. And from that line (stump) a Person (Branch) will be born. A Savior for the nation of Israel.

Just as growing takes time after planting a garden, so too it took time for the Branch of Jesse to appear. Jesus is that Branch. He fulfills the prophecy made by Isaiah. Jesus is a descendant of Jesse. Jesus is descended from King David and can lay claim to the throne of Israel. As a descendant of Jesse, that means that Jesus is also human. Jesus needed to be human in order to make the ultimate sacrifice to save mankind from their sins.

So what does this mean for us? Hope was being offered to the Israelites in a time of turmoil and chaos. Hope is being offered to us today. Jesus has already come and covered our sins with His blood. But He has not yet reclaimed the throne of David. That is our hope for the future. His coming return. His final return, when every knee will bow and every tongue will confess that Jesus Christ is Lord. (Isaiah 45:23)