14 “To the angel of the church in Laodicea write:
These are the words of the Amen, the faithful and true witness, the ruler of God’s creation. (Revelation 3:14, NIV)

The church in Laodicea was likely founded by one of the Apostle Paul’s disciples. Laodicea was a wealthy Roman city that was a center of textile production and banking. It was located along major trade routes, making it a wealthy church that eventually spanned an entire city block! 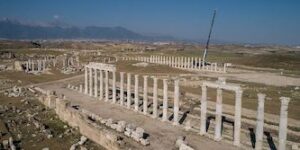 The letter the Apostle John recorded to the church of Laodicea in Revelation is unique, in that there are no redeeming qualities listed for the church. Instead, the church is only condemned, especially for its “lukewarm” behavior. At the time, Domitian was emperor of Rome. He was the first Roman emperor to declare himself a god while still living and demand people worship him as such. The church at Laodicea refused to stand up against Domitian, compromising their Christian faith in order to maintain rank and status in the secular world.

In His Revelation to the church at Laodicea, Jesus addresses Himself as the Faithful and True Witness. Jesus is faithful. He always has and always will fulfill His word and His promise. His life on earth is an example of that. He came to earth as a human for one purpose – to die an unjust death. He gave His word to His Father, the Lord God, that He would be the ultimate sacrifice for mankind’s salvation. Jesus’ prayer in the garden before His arrest shows that He did not want to die. Yet, He persevered on His path, fulfilling His promise.

He was arrested and stood trial, where malicious lies and falsehoods were spoken against Him. Jesus spoke the truth, knowing it would condemn Him. As a True Witness, Jesus always spoke the truth. We see this throughout His ministry.

So what does this mean for us? The truth is not always popular, not always wanted. Yet it is always needed. Jesus is the Faithful and True Witness. He spoke the truth and lived in accordance with that Truth. As we live our lives as witnesses for Jesus Christ, we must also seek to be faithful and true. Faithful to God’s word, upholding it in our everyday life, and living our lives according to its truth. How do you witness for the Lord?