The Amazon logo is recognized world wide, and most also recognize the meaning of the arrow pointing from A to Z in the logo.  The arrow implies that Amazon sells and delivers everything from A to Z, the first and last letters of the English alphabet.  In the above passage in Revelation, Jesus tells John that He is the “Alpha and Omega.”  In the Greek alphabet, “Alpha” is the first letter, while “Omega” is the last letter. By declaring Himself the “Alpha and Omega,” Jesus is saying that He is eternal.  He always has been and always will be.  He is A to Z.

Jesus was there at creation.  He was there through all the struggles the Israelites faced.  He came to earth to be offered as a perfect sacrifice so that all mankind can be assured of eternal salvation.  And He will be there at the end: 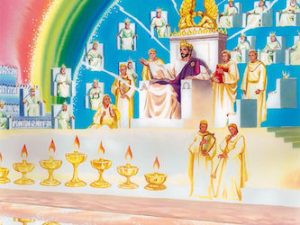 15 The seventh angel sounded his trumpet, and there were loud voices in heaven, which said:
“The kingdom of the world has become
the kingdom of our Lord and of his Messiah,
and he will reign for ever and ever.”
(Revelation 11:15, NIV)

At the end of the world as we know, Jesus will be there.  He will establish His new kingdom, which He will reign over eternally.  Even now, in this sinful, imperfect world, His Father, of whom Jesus is a part, has supreme authority over all.  Jesus, like His Father, is eternal, never-ending, constant, ceaseless.

So what does this name mean for us?  We never have to worry!  Jesus is always there.  When we pray, He is listening.  When we cry out, He hears us. And when we suffer, He holds us.  He is always there for us, always helping us.   He was here before us, preparing our way and He will be here after us, waiting until the day we can join Him in His eternal reign.