Skip to content
Easter The Names of Jesus
TFFCM 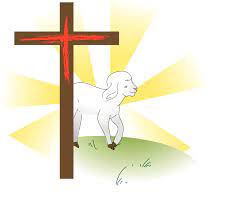 Between the egg hunts, egg decorations, chocolate bunnies and eggs, candy, and the Easter Bunny, sometimes we forget what exactly we are celebrating on Easter. On Easter Sunday, church attendance skyrockets. It is one of two holidays in which people who don’t regularly attend church make it a point to show up. Easter is the ultimate celebration in the church year!

Jesus is called Lamb of God by John the Baptist when he saw Jesus approaching. John knew immediately in whose presence he was. He knew who Jesus was and what He had come to do. Jesus had come to grant salvation to all mankind as the Lamb of God. But to understand why Jesus was called the Lamb of God, we must travel back thousands of years into the Old Testament.

Animal sacrifice first began with Adam and Eve. After they sinned by eating from the Tree of Knowledge of Good and Evil, they recognized that they were naked and could no longer stand in the presence of God. They hid themselves. God provided them with the skin of an animal to cover their nakedness. In order to create the clothing, God would have had to kill the animal (shed its blood) to use its skin. The first animal sacrifice.

Then there is the story of Abraham and Isaac. God instructs Abraham to make a sacrifice. Abraham was prepared to sacrifice his only, his long-awaited son, Isaac. At the last moment, God provided a ram, an adult sheep, for sacrifice.

Thousands of years later, God instructs the Israelites in Egypt to sacrifice an unblemished lamb and brush its blood over the tops and sides of their doors. This sacrifice and act of devotion would save the lives of those within the homes. They were protected by blood, just as we today are protected from death by the blood of Jesus Christ, if we have chosen to be covered by it. 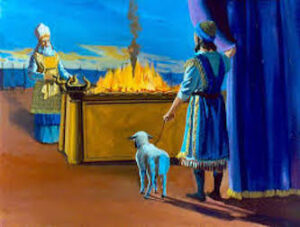 While the Israelites were in the desert, God appeared to Moses, giving him instructions for sacrifice, instructions that were continued all the way to the day of Jesus. Every morning and evening, a lamb was sacrificed at the temple for the sins of the people.

When God spoke to the prophets, it was foretold that one was coming that would be brought “like a lamb led to the slaughter.” It was familiar imagery to the people of Israel. It was a practice they had probably seen many times in their lives.

John the Baptist, in identifying Jesus as the “Lamb of God” was announcing that Jesus was the ultimate, perfect sacrifice for the sins of all mankind. Animal sacrifices in the temple had to be from an unblemished animal. But just as no human is perfect, no animal was perfect, hence the daily sacrifice.

But Jesus was perfect. Jesus experienced every temptation to sin, yet resisted all, never partaking in sin. Jesus, as the Lamb of God, was the perfect sacrifice, the ultimate sacrifice. He fulfilled the Old Testament law. Jesus died for all past, present, and future sins. All have been washed away by His blood. Animal sacrifice was necessary no more.

Sacrificial lambs were an important part of Jewish history. All Jews would have recognized the importance of a name such as Lamb of God. But few were willing to accept its implications. 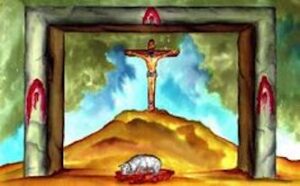 So what does this mean for us? Because of Jesus’ sacrifice, we no longer need to make sacrifices to atone for our sins. Through Jesus, we can experience God’s grace. As the Lamb of God, Jesus took all my sins, all your sins, all sins, upon Himself. He suffered beatings, humiliation, torture, separation from God, and ultimately death, so that we may one day spend eternity with Him! He did this freely! All we must do is accept His sacrifice.

If you have never accepted Jesus’ sacrifice, accepted Jesus as your Lord and Savior and you wish to, now is the time! Find a quiet place and open your heart to God. Say a prayer to Him, asking Him to forgive you of your sins. Thank Him for His grace and mercy in providing His Son, the Lamb of God, to cover your sins. Tell Him you want a relationship with Him and ask Him to come into your heart and change your life. Spend some time in quiet meditation, seeking to hear His voice and let yourself be filled with His spirit. Welcome to the family of Christ!