King of Kings and Lord of Lords

14 They will wage war against the Lamb, but the Lamb will triumph over them because he is Lord of lords and King of kings—and with him will be his called, chosen and faithful followers.”  (Revelation 17:14, NIV)

11 I saw heaven standing open and there before me was a white horse, whose rider is called Faithful and True. With justice he judges and wages war… 16 On his robe and on his thigh he has this name written:

KING OF KINGS AND LORD OF LORDS

Who was the very first king in the world?  Historians are unsure.  Surviving written records show that the oldest civilizations in the world had kings, however, it is impossible for scientists to determine who came first, as their records have likely been lost to the dust of ages.   Today, throughout the world, 43 sovereign states list a monarch as the head of state.  Perhaps the most famous is the British monarchy, especially with the recent death of Queen Elizabeth II, and the establishment of Charles III as the new king.

Kings were a common form of government and ruling throughout history.  During the time of the Israelites, most of the surrounding nations were ruled by kings.  Israel was also ruled by a King – the King of Kings – yet they failed to recognize this fact.  They rejected their great King and instead asked for a lowly, earthly king to be established so that they could be like “all the other nations.” (I Samuel 8:5, NIV)  Despite the warnings of hardship that having a king would bring, Israel insisted they be ruled by an earthly king and the Lord obliged.  In the end, the earthly kings led the Jewish nation away from God, their ultimate King, and down a path of destruction and folly.

During the days of kings in Israel, many prophets foretold of a coming King, a perfect King, who would save His people. This King would not only rule over Israel but over the whole world! The people of Israel once again failed to truly listen to what the Lord was telling them. 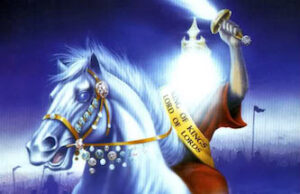 The Jews expected a king, an earthly king, who would lead them against the Romans, their oppressors.  They expected a violent revolution, much like the battles of old to claim the Promised Land.  They expected an earthly king to deliver through earthly means an earthly salvation.  But God’s plan was so much bigger.  And Jesus was no earthly king.  God sent a Divine King, a King of Kings and Lord of Lords, to deliver eternal salvation through Almighty means.  This Divine King came in the form of the son of a carpenter.

But this King did not come to rule as the Jewish people expected.  Instead, He came to die in our place, so that we can spend eternity with Him, under His rule.  And it is not until the end of days that Jesus will be recognized throughout all creation as the King of Kings and Lord of Lords.  It is at the end of days that all kings, all presidents, all rulers will acknowledge that Jesus is the true ruler over all the earth.