“The people are the best guardians of their own rights and it is the duty of their executive to abstain from interfering in or thwarting the sacred exercise of the lawmaking functions of their government.”  His father was a signer of the Declaration of Independence, a member of the Continental Congress, and a good friend to George Washington.  He was the only President who studied to become a doctor, although he did not complete his schooling.  He is William Henry Harrison, 9th President of the United States, serving from March 4, 1841, to April 4, 1841.  William was born in Charles City County, Virginia on February 9, 1775, one of seven presidents from Virginia.  Although his supports would later claim that he was born in a log cabin, William was actually born in a plantation home on Berkeley Plantation.  He was also the last president to be born under British rule.  William was last of seven child born to his parents and was educated at home until the age of 14.  He then went to the Presbyterian Hamden-Sydney College before transferring to University of Pennsylvania for medical training.  William did not enjoy the subject and left college following his father’s death in 1791. 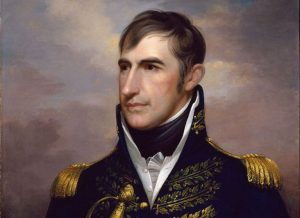 William instead joined the 1st Infantry Regiment of the US Army at the age of 18, where he served under General “Mad Anthony” Wayne.  William worked his way up the ranks of the military, participating in many battles on the American frontier.  While in the military, William met Anna Tuthill Symmes, who would become his wife.  They went on to have ten children together, nine of which lived into adulthood.

William’s political career began in 1798, when he resigned from the military.  William began actively seeking a position in the Northwest Territory.  He became Secretary of the Territory due to the help of his friends, Secretary of State Timothy Pickering.  During his time, William frequently acted as governor due to the absences of the actual governor.  William quickly became popular, not only among the elite eastern circles, but also among the settlers due to his campaign for lower land prices.  William went on to become the first elected representative of the territory.  Because it was a territory and not a state, William was not permitted to vote on bills, but was allowed to serve on committees, submit legislation, and participate in debates.  During this time, Williams successfully promoted the passage of his signature bill, the Harrison Land Act, which eased the buying of land in the Northwest Territory.  William also assisted in the division of the Northwest Territory into the Ohio and Indiana Territories.  His work was noticed by President John Adams who nominated him to be governor of the new territory.

As governor, William moved to the Indiana Territory, where he built one of the first brick structures in the territory.  It became known as Grouseland and was a tourist attraction due to its beauty.  During his time as governor, William obtained great swaths of land, although not smoothly, as the Indian nations increased their resistance under the leadership of Tecumseh.  On November 7, 1811, William and his men were surprised before dawn with an attack by the Indians.  Once the sun came up, William and his men were able to defeat the Indians, although they suffered heavy losses.  This battle was known as the Battle of Tippecanoe.

Many people blamed the British for inciting the Indians and supplying them with weapons.  War broke out in 1812, and, on September 17, 1812, William was made commander of the army by President James Madison.  William led the military to victory, defeating the Indians and the British at the Battle of Thames, which also resulted in the death of Tecumseh.  However, in 1814, Secretary of War John Armstrong divided the command of the army and assigned William a less than desirable position, causing William to resign immediately.  Congress later determined that he was mistreated and awarded him a gold medal for his service during the war.

William returned to Ohio after the war, serving in the US House of Representatives, the Ohio Senate, and the US Senate until 1828.  After ceasing work for the government, William continued to work on his farm and, for a time, ran a distillery.  He became concerned over the effects of whiskey on consumers and ceased production after a brief period.  He continued to speak out against whiskey.  In 1836, he ran for president, but lost to Martin Van Buren.  William returned in 1840, and ran again, defeating Martin.  William ran on his war record and the slogan “Tippecanoe and Tyler too!”  In a presidential first, William and his vice-president were from the same county.  William also revolutionized campaigning.  He was the first candidate to actively campaign.  Previously it was thought inappropriate to personally campaign.  He was also the first president to have women actively campaigning for him.

William has the unfortunate distinction as the shortest presidency ever – 30 days, 12 hours, and 30 minutes.  He was also the oldest president elected at the time at the age of 68, surpassed only by Ronald Reagan and Donald Trump.  On the day of his inauguration, March 4, 1841, it was cold and wet.  William rode his horse instead of inside an enclosed carriage and spoke outside, with no overcoat, for one hour and 40 minutes, the longest inaugural address ever.  He then attended several inaugural balls that evening.  Over the course of the next month, William sent many names to Congress for various nominations and entertained many people who stopped by the White House.  On March 26, William was discovered to be slightly ill by his physician.  He was given the best medical care available, which included treatment of laudanum, opium, caster oil, camphor, wine, brandy, and cupping.  It is thought that the “cure” actually killed William.  He died on April 4, 1841, the first president to die while in office and making 1841 the first year in which three presidents served (this has only happened one other time, in 1881).  Because he was the first president to die in office, there was no protocol in place, including questions over the role of the vice-president.  Eventually, it was determined that if the vice-president took the Oath of Office, he would become president.  William is the only president to have a grandson, Benjamin Harrison, also elected to the office of the presidency.