“This is your country as well as anybody else’s country. This country is founded upon the principle of equality. He that is meritorious and virtuous, intellectual and well informed, must stand highest, without regard to color.”  He never attended school and taught himself to read.  His parents were poor, with his mother working as a washerwoman and his father dying when he was three.  He went on to be the first president to have a Queen, Queen Emma of the Sandwich Islands (Hawaii), visit him in the White House.  He is Andrew Johnson, 17th President of the United States, serving from April 15, 1865, until March 4, 1869. 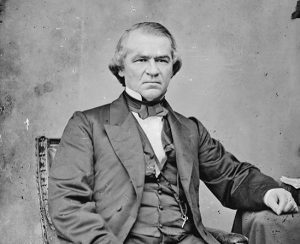 Andrew was born in a log cabin in Raleigh, North Carolina on December 29, 1808.  At the age of 10, Andrew was apprenticed to a tailor shop and bond to the job until he was 21 years of age.  However, Andrew and his brother, who was also apprenticed, ran away.  Andrew went on to later open and run a successful tailor shop in Tennessee.  Andrew married Eliza McCardle in 1827, where at the age of 18, he was the youngest president to be married.  Eliza was 16.  Eliza helped Andrew advance his mathematical skills, along with his writing.

Andrew considered running for president in 1856 but felt he did not have the necessary national exposure.  Instead, Andrew ran for and won a seat in the US Senate.  Following Tennessee’s succession in 1861, Andrew remained loyal to the Union and was the only Southern US Senator to retain his seat, although he was vilified by the press in the South.  Andrew’s loyalty to the Union was rewarded by President Abraham Lincoln in 1862 when he was appointed military governor of Tennessee.  Andrew was moderately successful but failed to gain control of state insurgents.  Andrew opposed the Emancipation Proclamation until Tennessee was granted an exception.

To increase his chances of being re-elected, President Lincoln appointed Andrew as his running mate in the 1864 election.  Lincoln easily won.  Unfortunately, Andrew did not get off to a great start as vice-president.  He was drunk at his inauguration and gave a rambling, somewhat incoherent speech before finally being sworn in.  Andrew avoided the public for the next few weeks.

On April 14, 1865, President Lincoln was assassinated by John Wilkes Booth.  There were also plans that night to assassinate Andrew, however, Andrew’s attacker lost his nerve.  Secretary of State, William H. Seward was also to be assassinated.  He was attacked and barely survived his injuries.  Lincoln died on April 15.  Three hours after his death, Andrew was sworn in as the 17th President of the United States.  President Andrew Johnson was one of five presidents that never ran for office and one of three that did not have a vice-president.

With the Civil War being ended for only one week by the time Andrew assumed the office of President, his first point of concern was the Reconstruction.  Andrew was on his own for the first eight months of his presidency, as Congress was out of session and not due to meet until December.  Andrew believed it was important to quickly reinstate the South and granted amnesty for nearly all ex-rebels. Southern states were also able to reform their governments as they wished.

Initially, President Andrew Johnson received support from both the North and the South for his policies.  However, Andrew failed to address in any of his policies one of the major causes of the Civil War: slavery.  The North demanded that as part of the South’s defeat, slavery be ended.  Andrew allowed the southern states to devise their own laws, which meant African-Americans lives did not change much.  When Congress reconvened, they first sought to work with President Johnson and his policies towards the South.  Andrew angered Congress when he refused to sign an extension of the Freedmen’s Bureau, a federal department that aided freed slaves.  When the Senate failed to override his veto, Andrew believed that he had won and his policies would proceed.

Andrew went on to veto the Civil Rights Bill, which Congress overrode, the first time Congress overrode a presidential veto of a major bill.  Andrew’s veto alienated all Republicans, even moderates, and showed that he was not willing to work with them to reach a solution.  President Andrew Johnson also opposed the 14th Amendment, which extends citizenship to every person born in the United States (except on Indian Reservations), penalized states that did not give freedmen the right to vote, and created new federal civil rights that were protected by federal courts.

In 1866 and 1867, Congress continued to pass bills and frequently overrode vetoes by Andrew, including the Tenure of Office Act.  The Tenure of Office Act required Senate approval for the firing of Cabinet members during the tenure of the president who appointed them and for one month afterward.  It is believed this was in response to several speeches made by Andrew in which he threatened to fire Cabinet members who did not agree with him.

In August of 1867, Andrew fired Secretary of War Edwin Stanton and appointed his replacement.  In January of 1868, a disapproving Senate reinstated Edwin, claiming Andrew had violated the Tenure of Office Act.  On February 24, 1868, the House of Representatives voted to impeach President Johnson by a vote of 128 to 47.  President Johnson was acquitted by one vote in the Senate, due to some political negotiating with the moderate Republicans.

Andrew failed to win the nomination for president in 1868, losing to New York governor Horatio Seymour.  In the final months of his presidency, Andrew issued a final amnesty for everyone in the confederate including Jefferson Davis, vice-president of the Confederacy.  He also pardoned Dr. Samuel Mudd who was convicted of involvement in the Lincoln assassination, for setting Booth’s broken leg.  Andrew refused to attend the inauguration of his successor.

After leaving office, Andrew returned home to Tennessee, where he sought to be elected Senator, which he won in 1875.  Andrew is the only former president to serve as a Senator after leaving office.  On July 28, 1875, Andrew suffered a stroke while visiting with his daughter.  On July 30, Andrew suffered another stroke and died the following day.  He was buried wrapped in an American flag with a copy of the Constitution placed under his head, as per his wishes.