“Knowledge comes, but wisdom lingers. It may not be difficult to store up in the mind a vast quantity of facts within a comparatively short time, but the ability to form judgments requires the severe discipline of hard work and the tempering heat of experience and maturity.”   He is the only president to be sworn into office by his father.  He is the first president to have his inauguration heard on the radio. And he was the first president to give a speech on the radio.  He is John Calvin Coolidge, Jr., 30th President of the United States, from August 2, 1923, to March 4, 1929.  He was born on July 4, 1872, in Plymouth Notch, Vermont.  Raised on a farm, Calvin soon dropped his first name of John, as it was his father’s name. 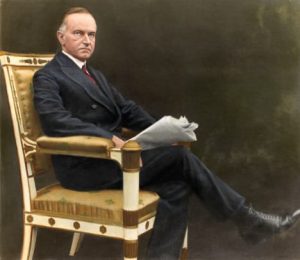 He went on to attend Amherst College in Massachusetts and then interned at a law firm.  Calvin was admitted to the bar in 1897.  The following year, he opened his own practice, where he earned a reputation as hardworking and diligent.  Calvin was a quiet man, earning him the nickname “Silent Cal,” and the complete opposite of his wife, Grace Anna Goodhue, who was quite talkative and social.  The two married in 1905 and had two children.

During the first few years of the 1900s, Clavin held a variety of local positions which gained him valuable political experience.  In 1904, Calvin suffered his only defeat in an election, for the Northampton school board.  The reason for his defeat?  Parents were concerned about his ability, as he had no children of his own.  In 1906, Calvin was elected to the Massachusetts House of Representatives.

From 1910-1911, Calvin served as mayor of Northampton, which allowed him to spend time with his growing family.  In 1912, Calvin was elected to the Massachusetts Senate, where he was instrumental in resolving several issues, including a workers’ strike.  In 1918, Calvin was elected Governor of Massachusetts, and, in 1919, he brought national attention to himself for how he successfully dealt with a police strike regarding their ability to join a union.  Then, in 1920, Calvin was chosen as the Republican vice-presidential candidate, with then-Senator Warren G. Harding of Ohio as the Presidential candidate.  The duo was handily elected, winning every state outside of the South.

As Vice-President, Calvin did not have many official duties.  however, President Harding invited him to attend cabinet meetings, a first for vice-presidents.  During this time that his nickname of “Silent Cal” grew.  He and his wife were often invited to parties, where Calvin would rarely speak.  When asked why he continued to attend parties that he did not seem to enjoy, Calvin replied, “Got to eat somewhere.”

On August 2, 1923, President Harding died suddenly while on a speaking tour in California.  At the time, Calvin was visiting with his father, who had no electricity or telephone.  After several hours, a messenger arrived to inform Calvin that he was now the 30th President of the United States of America.  Since the Chief Justice of the Supreme Court, who traditionally swore in the President, was 500 miles away, Calvin was sworn in by his father, a notary republic, at 2:37 am.  Upon his return to Washington, he was again sworn in, this time by a Supreme Court Justice.  President Calvin Coolidge spent the rest of his term without a vice-president, until his overwhelming re-election in 1924.

As president, Calvin presided over the era known as the “Roaring Twenties.”  Calvin disliked government regulation and reduced the size of the government, leading some to blame him for the Great Depression.  However, his policies and reducing taxes were effective in decreasing the federal debt.  Calvin distrusted foreign allies, discouraging membership in the League of Nations, a predecessor to the United Nations, and signed a bill limiting immigration.  He also refused to recognize the Soviet Union.  Calvin was in favor of civil rights, refusing to appoint any known members of the Ku Klux Klan.  He also appointed African-Americans to government positions and advocated for anti-lynching laws.

President Calvin Coolidge was rather popular, even though he severely limited his working hours, insisted upon afternoon naps.  He also refused to use the telephone for official presidential business.  Calvin did call and talk to his father every day though.  Despite his popularity, Calvin chose not to run for a second term and stepped down as President in 1929.

As for his beliefs, Calvin was a Congregationalist, becoming such after accepting communion during his first visit to the First Congregational Church in Washington.  Throughout his presidency, he believed in protecting the freedom of religion in the nation, especially for minority religions.  His faith also guided many of his actions as president.  He said, “It would be difficult for me to conceive of anyone being able to administer the duties of a great office like the Presidency, without a belief in the guidance of a divine providence.”  Calvin died in his home in Northampton, Massachusetts of a heart attack on January 5, 1935, while preparing to shave his face.  Calvin was 60 years of age.  He is buried in Plymouth Notch, Vermont, next to his parents and son, who died in 1924.