“We must support our rights or lose our character, and with it, perhaps, our liberties.”  He was the last Founding Father to serve as President.  He was the first president to wear long pants, as opposed to the knee-breeches favored by all previous presidents.  And, he was the first president to ride in a steamboat.  He is James Monroe, 5th President of the United States, serving from March 4, 1817, to March 4, 1825.  James was born on April 28, 1758, in Westmoreland, Virginia.  He was one of seven presidents from Virginia and was born while Virginia was still a colony of England. 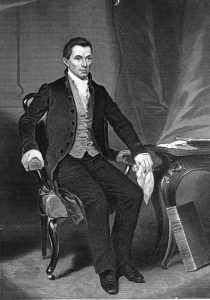 James excelled at his studies, and, at the age of 16, James began college, attending the University of William and Mary.  He married his wife, 17-year-old Elizabeth Kortright in February of 1786.  James did not attend the University of William and Mary for long, as he dropped out and joined the Continental Army in 1776.  His first act of rebellion was to raid the arsenal of the British royal governor.  He gave the stolen supplies to the Virginia militia.  James served under General George Washington at the Battle of Trenton, a/k/a the Crossing of the Delaware, where he was severely wounded.

Following the Revolutionary War, James went on to study law under Thomas Jefferson.  The two developed a life-long close relationship.  James’ political career began in 1782 when he was elected to serve in the Virginia House of Delegates.  Following his marriage, James retired from politics and began farming.  He eventually sold his property to begin practicing law, and eventually re-entered politics.

James, in the 1787 Federal Convention, opposed the new constitution because it lacked a bill of rights.  However, James, along with several other key figures, chose to ratify the new constitution and push for change once the new government was established.  James was defeated by James Madison for a seat in the House of Representatives but was quickly appointed to the United States Senate.

Within one year, he had become the leader of his party in the Senate.  He later resigned his seat in the Senate to become Ambassador to France. As ambassador, he arranged for the freedom of all Americans held prisoner by the French, including Thomas Paine.  Following harsh criticism by then-President George Washington, James was dismissed from his position.  James returned to Virginia, where he was elected governor in 1799.  He later went on to serve as the Secretary of State and the Secretary of War under President Madison.  He is the only person to concurrently hold two cabinet positions.

James was elected as the 5th President of the United States in 1816.  He faced little opposition as the other major political party, the Federalists Party, was rapidly losing support.  James won all but 34 electoral votes.  The same year that Monroe was elected President, the White House was actually painted white, after having been burned during the War of 1812.  James was the first president to be inaugurated outside.  President James Monroe faced some problems during his first term, including the nation’s first economic depression, which lasted three years.  James viewed this as a normal part of a nation’s growth, however, many people suffered during this time.

In the following presidential election, James faced no opposition, as the Federalist Party did not have a candidate.  James is the only president, besides George Washington to run unopposed.  Surprisingly, James failed to capture all electoral votes, as one elector in New Hampshire voted for John Quincy Adams, who was not running.  His second term was known as the “Era of Good Feeling,” as the nation appeared to be operating smoothly and there was little political fighting.  President James Monroe is known for his Monroe Doctrine, which forbids the

interference of European nations in North and South America.  Additionally, during his term, Missouri applied to become a state.  In order to appease Northerners who feared that this would upset the balance between slave and free states, Maine was also allowed to become a state.

James Monroe died on July 4, 1831, at the age of 73, from heart failure.  He was the third President to die on Independence Day, following Thomas Jefferson and John Adams five years earlier.  James died 55 years after the Declaration of Independence was signed.  Little is known about his religious beliefs, as his surviving letters contain no reference, nor do surviving letters from his family members contain mention of his religious beliefs.  Before the Revolutionary War, the Monroe family attended the Church of England.  During his adult years, James attended an Episcopal church, but there is no record of him taking communion.